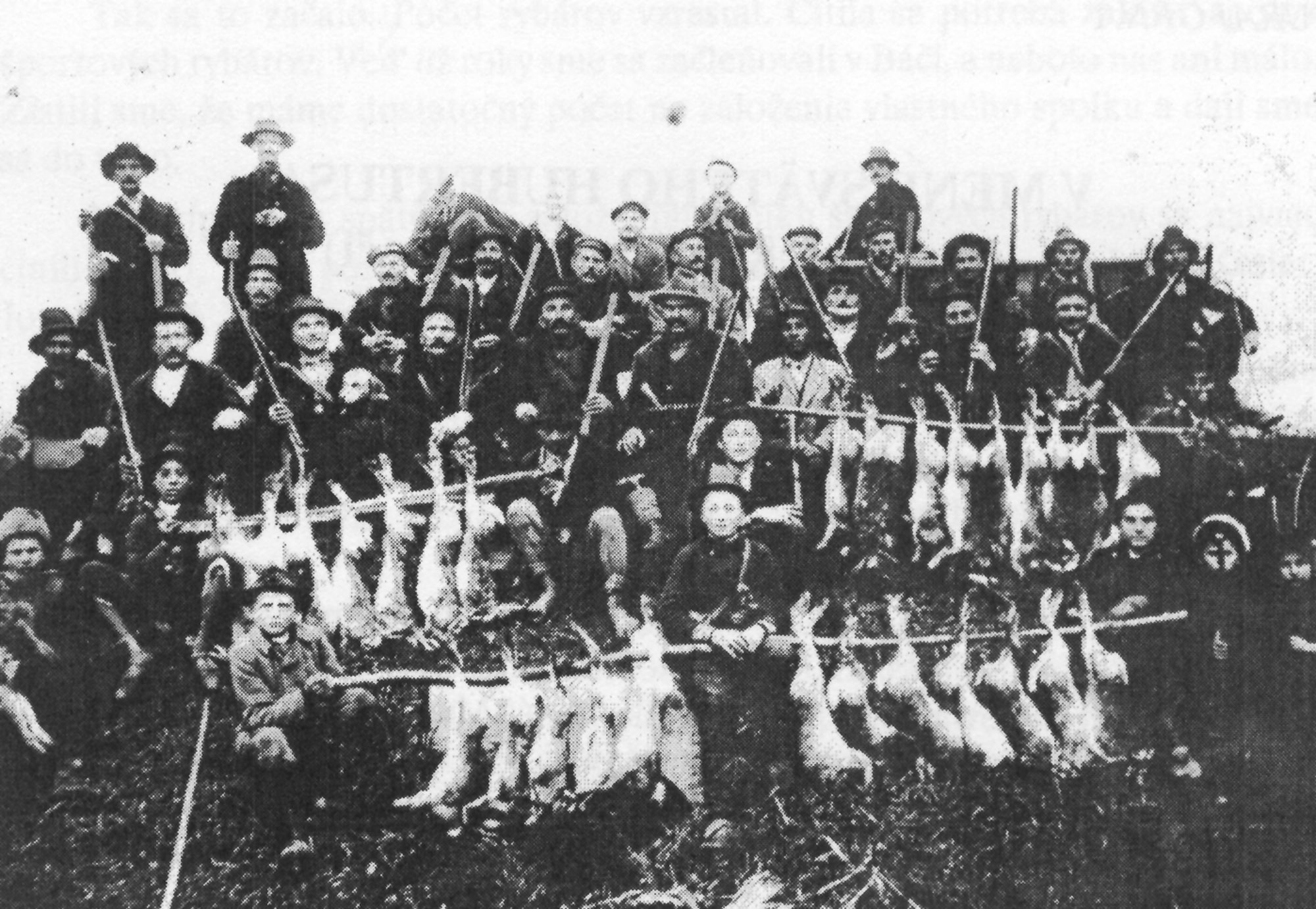 In the Name of Saint Hubertus

People of Selenca took the hunting oath for the first time in year 1901, when Hunter’s Society was established. It was official establishing of society and its founders and first members were Jan Javornik, Tomas Medved, Michal Medved, Jan Varga, Jan Ober, Karol Stukavsky, Tomas Krajcik, and Karol Hyl. Facts about, where the first members were employed and what was their calling, we do not have, but they surely had something in common, one thread that bound them together, and that was a love for nature and passion for hunting.

From the ancient times hunt was calling, by which men provided food for their families, however, nowadays when food is provided in different ways, hunt became pure pleasure and recreation. Trip to district and walk on fields are for sure one of the healthiest leisure and when we add hunting pleasure to it, it is nicely spent day.

When our ancestors colonized this region, they have come on territory rich on wild animals and quality game. It was region of forests and in certain amount cultivable soil and pastures (Pustara and Luky).

In those times, poaching might have been one of the ways to survive, but definitely and strictly punished, so they must avoided this activity. However, those who liked this, punishments could not stop them, same as nowadays when you can lose your whole property because of poaching.

In year 1901 in Selenca’s district redistribution of land started, borders of district and hunting ground were precisely determined. On this occasion, the first hunter’s society was established and it was active for 13 years, until the beginning of WWI. Beside founders, in society yearly joined new members and society was becoming stronger and stronger. Its members could not be everybody, because hunting always has been privilege of rich people, who are in position to provide good gun (rifle), ammunition and the other implements. In those times, a lot of money was spent on renting a hunting ground from state.

This time society was active for 21 years (1919-1940). From those times, we do not have many facts, but we know that good arms were very hard to find, and they were hunting with old models of rifles. There was no ammunition, so every hunter charged his ammunition at home. They were using gunpowder and plug, which they could find in shop.

At the end of war, already in august of year 1945, Hunter’s Society renewed its activity and was named “Jarabica” (Partridge) and until today, its activity has not extinguished and the name remains the same.

The most massive society has started to run in changed conditions. Hunting ground was given to society by state, free, however everything else was harder than ever before. There were no rifles, ammunition, so haunting in first years after the war was making the best of it. There was no ammunition, so everybody charged for himself or herself, as they knew. They were using powder from cannon ammunition, or they grinded mortar ammo. They did not know the exact proportion of this explosive required for ammunition, and it was happening that the old rifles could not bear it and when shot they ruptured. Instead of plug, they were using chopped wire.

These problems improved in second half of fifties and at the beginning of sixties hunters were able to buy a new homemade Crvena Zastava rifles or imported rifles from Soviet Union (our hunters called them “Rusky”) and great number of hunters of Selenca still use these rifles nowadays.

Number of the hunters was increasing every year. In year 1965 society had 42 members and in 1993 was the most numerous- 86 members. In the same year, new Hunting law was adopted and according to it, every society had to have paid game warden, member of a committee for hunting and that increased hunters expenses in certain degree. Because of that, they formed Union of Hunting Societies in Bac commune, which started with activity from 01.07.1994. In these years of crisis, which are behind us, for many it was a big obligation and they dropped out from society. Today society has only 64 members.

Every year Selenca’s hunters include larger numbers of hares and pheasants in their schedule. They offer it to domestic and foreign hunters- tourists. Profit is used to buy pheasants, which reproduction in the nature is small.

The members are mostly farmers, which is in relation with Selenca’s population structure. Beside of few years, when people of Selenca have not been allowed to hunt in district, hunting ground always has belonged only to people from Selenca.